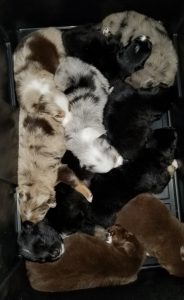 We expect great things from these pups.  Our goal is to raise working dogs who can turn up the volume to work and then turn the dial down and be great family companions. They are double registry eligible with ASCA and AKC along with many other minor registries.

These pups have a pedigree out of many Hall of Fame working lines such as Crown Point, Pincie Creek, Slash V, Hangin’ Tree, Las Rocosa and others.  Check out their prior siblings from 2017 and 2015.  Feedback from these pups for work, play and companion have been excellent.

These pups are so much fun to watch play (and play fight).  They are all coming to clapping while calling.  They even seem to be responding to names.  Don’t worry, they quickly adjust to new names though sometimes they do insist on chosing their own names.  Their sire was called “Abe” when we got him at 4.  He didn’t really respond to it.  We just kept thinking of different names and when I called him Jack he responded.  So Jack chose his name regardless of what his papers or prior people call him. 🙂

Click links below to open in new tab the
#1 YouTube video playlist of
Aussie Pups at 3 weeks old. 🙂

Polly – Black Tri female (minimal white)
Polly is a beautiful big girl.  She seems to be the most laid back yet assertive female and such a cute face. 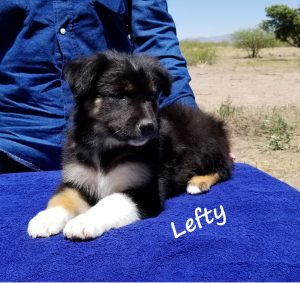 Lefty – Black Tri male
Lefty got his name Lefty soon after birth due to the high white sock on his left front leg.  Boys wanted to call him Woody Woodpecker because he liked to chew on the sticks when just barely getting teeth.  An adventurous playful big boy. 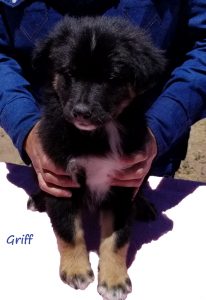 Griff – Black Tri male (minimal white)
Griff so far is a way laid back boy.  Apparently there is a character consider lazy called Griff that the boys gave him this cool name.  As he got more mobile he definitely got more active and no longer seems like the lazy pup.  He is continually under foot for attention.  I am just loving this boy.  Another big boy in the litter that has ended up the heaviest, biggest pup.

Bobbi – Natural Bob Tail Red Tri female
Bobbi’s name is soooo original. 🙂  She was born with a natural bob tail.   She is built like her mother and like all the pups loves to play and get attention. 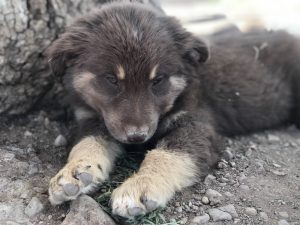 The boys called this boy Houdini due to his “escape” abilities.  He was the first to show his curious and adventurous nature. 🙂 He was the first found outside the dog house (and put him back), the 1st getting out the 6″ high corral outside the doghouse and the one who escaped the bin about 12″ high crawling over siblings and somehow getting out the bin.  Solid heavy built male.  He is turning into such a gentleman.  He politely sits underfoot waiting to be pet while the others climb for attention.  I reward that behavior with lots of petting.  He is seemed the biggest boy of the bunch but Griff has outweighed him in the end.

Beautiful young lady.  I just love her face.  Boys consider both red merles like Caramel and just came up with two ways to say it and Caramel just seemed more lady like.  She kept moving when I was trying to take pictures at 3 weeks.  She is still an on the go girl when playing yet loves to come for attention and to play.

ADOPTED: Dora – Blue Merle Tri female
Dora is the dark blue merle and smaller than her sister Nora.  Somehow she captured the camera that I got sooo many shots in these 3 week old photos.  Weeks later she still seems photogenic.

ADOPTED: Nora now known as Blu – Blue Merle Tri female
Nora is a beautiful light blue merle girl.  She is the biggest of the girls and a wonderful personality (just like her siblings).

RIP: Flower – Black Tri female
This little girl started out as little Jackie at birth and our little girl changed her name to Flower.  I thought perfect.  Flower made me think of the Disney Bambi skunk being called Flower. 🙂  Flower is the tiny girl of the litter receiving extra attention to assure her survival in a litter of 10.  Just way adorable.  Loved by our little girl.  Tragedy strikes. We came home after extended trip away from home to discover the loss of Flower (unknown cause) in October 2018.